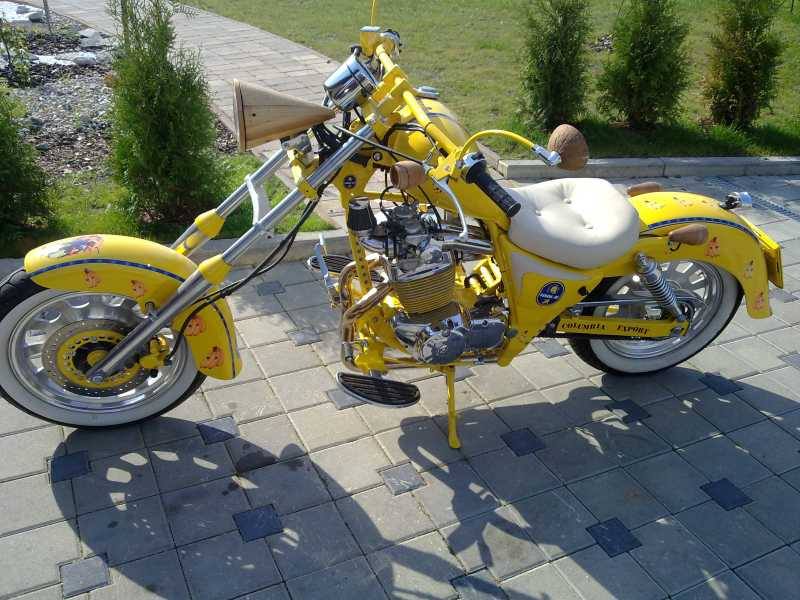 The basic structure of the motorcycle was not so , however , it was difficult to swim only cornering behavior and motor sound as a vacuum cleaner , you gasping for breath. All gone, and again ! This time it was not just the little things , the bike went from scratch.
I cut the frame krapínek ( not literally gentlemen , although sometimes it seemed like - haha ) . I cut back and it so extensively that only had room for one Zitz Platz (sofa ), it was self-evident in the plan.
The main frame was slightly překopnut and extended swingarm compared to the original technology in China rubber bearing, and it was changed such that they came namlátit pin bearings as okruhovky with minimum clearances and defining the lateral gaps around the frame where kývka sets. It was funny that even there then for God's sake did not want it back. Krapínek to engineers in Chino driven and spacing screws nesbíhaly . Then I realized that the rubber store for them in the production easier , because half an inch to give the move a mistake when drilling Actually, no error is because when more bac hammer to get in there . Motorbike cornering sits as bob bob sledding.
So I had kyvku , frame too ,null,null, hm , and as of right now .'' Motůrek out and my head may rotate thread for thread - , ding crunch , sounds dull and the idea of the world '' . Pistons from 150 cc enduro engine with a compression shape and moldings on the valves total deep - well it's not bad ! Just had to drop down FLEXI lose to its length to avoid hitting setrvák Crank . Head because she went down to 2.3 mm , it will ojojoj compression , yet it does not start lever ! !
Motůrek paint , polish and now carburetion . It takes something original , karbec next to the engine side as Harley or how the company appoints , apparently produces a motorbike in the USA and it is somewhere there in the puddle or something. Do not even know what it is exactly performance , my guess is somewhere around 25PS 18PS from the original , but krouťáček is náramnej .
So , to some suction elbow of stainless steel, so it looks like . Oh, and then came trouble ! Sucking prolonged and slow down the performance of the engine - Ooh , how and what? Well, it was meandering , secant and Elaboration , either it drove like a pig surreal , but only up to 4000 rev / min and then nothing , or vice versa , choked a bitch and then by tearing asphalt. Finally, it was easy to make a suction diameter slightly smaller to not take much air and the neplašil . It had a smaller power , but it 's went from the bottom up somehow smoothly.
One time with Ladakh. What ? It costs a lot of money ? ! ? A few tubes of stainless steel polisher and a few hours of sweat and was the world's handsome exhaust lacinej .
The tank I used the 50XT Chopper from the first reconstruction is small and makes the engine more powerful effect and somehow I liked more than the original chubby bobble . I just převařil neck on the right side, it's just nicer .
Airbrush has every idiot , what are you able to pay , so I wanted something interesting neokoukaného . I saw the film with Bud Spencer , by the way, I was in childhood odkojenej . His name was Joe Banana . And that was it.
Nice wooden blinkers from alder wood , mirrors, coconut , Polepka with banánama Chiquita . Headlight served in a Carlsbad bar like a lamp over the table in a corner for lovers and give them light on the vices - haha . No such lamp here , whether you are dark and do not be shy .
Bars are the quads, just turned upside down and ready for the mirror mounts to fit , they're the holders blinkers . Do I stuffed a normal lamp light and was approved fertig .
Slightly předkopnuté steps, which by the way is not very convenient , time change this . The front damper extension , the turning radius is reduced , so that when parking it looks like you have a Cadilac and the road is damn úzkáááá . But for driving řídítkama does not turn , it's ok .
So far I have driven 1300 km , about , not much time and everything is no problem when I do not count that I fell for driving back light and then hung while only clockwork, no , he probably got sick from the ride - hen Heen blublblubllblabla .
Just for fun , I joined the Bohemian Motorcycle Custom Bike reconstruction in 2011 at the exhibition in the Prague center on the occasion of motorcycle shows . Well, lo and behold , I was the only one with the People 's wheels, the rest of the same Harley for half if not more of the ball dudes from all over the country and Europe, thus hat down , there were beautiful pieces . In its category, I got 5th place . Not bad for a kid from the garage right? ! Nobody wanted to believe that it is Chinese bike.
For all those who have a desire to do something like that to let go just recommend to not impose limits on stupid crap with abandon . No one learned from the sky , every mistake and error can be remedied or modify it costs only time and a flash. But the result is just for you reward.