One of the first rebuilding ! ! CHOPPER KING 50XT Limited Edition!!! 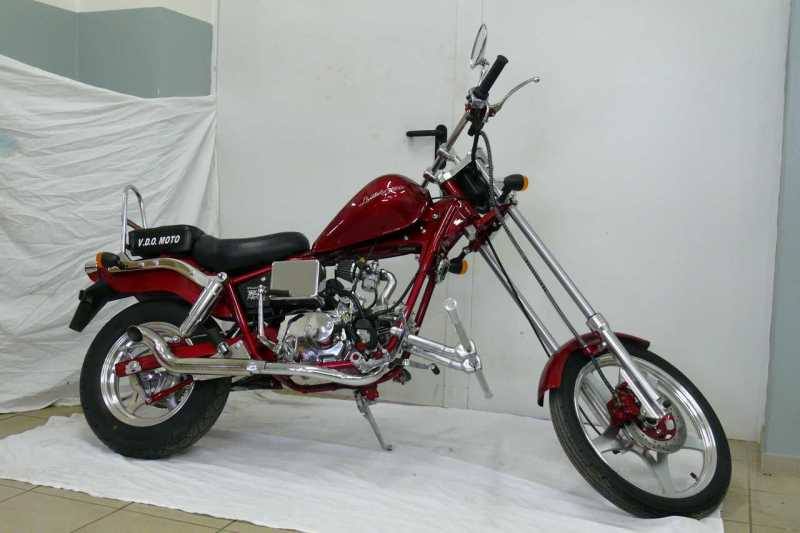 Let everyone says what he wants , but the popularity of Chinese motorcycles is growing , especially in the age group of teenagers , and it is very good.
I would like to prod stubborn opponent of all these motorcycles and show what can be done to make the bike for the purchase price under thirty thousand crowns.
I would like to remind you that even the largest and best known motorcycle manufacturers produces a machine that everyone is satisfied and the price of such equipment often exceeds několikasettisícovou border. Let's see eg Harley Davidson , nearly everyone who buys such a machine in the basic version , it unreal money for rebuilding and adjusted according to your imagination .
I'm not talking about that, this brand is suffering its profláknutými disorders and ailments , but I do not want to pull. I just want to say that if you want the bike to your liking , usually it's just us , our skill and our payment method , however, many things can be done at home and without much cost .
I took to task 50XT Chopper King , the basic performance of 2.6 thousand horses at 7,000 / min and torque of 2.2 nm/6250 maximum design speed of 45 km / h , which can easily exceed the some 50 to 60 kilometers , after a good wind back - haha . Sure, prdítko for a few bucks , so what to expect from him ? Blink So what all comes with it to do.
Engine: power can lift up to 6.9 horses and 7.6 nm/5500 content 110cc (unmodified CDI ) . So it 's worth noting right? This engine can without much difficulty ream .
Edit intake , better filter , 98-100 oct . gasoline. Some who transfer into overdrive and upaluje to 90 km / h hill nekopec . It is true that it is not free , but for such an adjustment with the renowned manufacturer, when you make it yourself, which I do not recommend ( workshop equipment and experience) come without a few around 40 to 50 thousand and we have a lot of ground. It also depends on what your company kitových parts zvolíme.To not the case here .
So this bug has pre-drilled 110cc motor , extended intake flange , sports filter, which is hidden in the original chrome package, wannabe tuned exhaust, but it's actually just polished stainless steel tube shaped into a corner. Předstupáky , straight stainless steel handlebars , extended fork , speedometer , which is not standard. Complete all paint Perl 6 layers of paint , polished everything that could be polished , lacquered accessories (clamps, disc brakes , pump , etc. ) .
The sound is okay as Harley Davidson . When I show 2007-2008 Motorcycle wanted to attract attention , just enough to start and they all fall apart around our stand as sparrows Grain and waited unreal beast with a big engine. Anyone who prorval head through the crowd , then amazed by what he saw . A small beetle that nicely chugging on and off all chest , I'm Chinese , '' what are you looking at ?
Today, the motorcycle has its owner , which is almost the age of 65 , if I remember correctly . He saw the motorcycle on the show , apparently just walked out of the hospital , so juknul to show that there will be nice. The site has paid the tab and in July I brought it to him . Since then, no sign , so I reckon that still runs without faults.
So for anyone clever lad with imagination and my dad, who has a heart in the right place when you see that synátor tends to create something and something gravitate. Nowadays the Internet, idleness and drugs is not enough investment to high. And the cost is equal to the demands of each of us. Without money to stay out of the pub apply basic treatment if you leave ream motor is around a few thousand , the rest I will create themselves at home , according to the skill and taste of each of you . Me reconstruction came to about 16-17 thousand , but everything, including the paint I did myself. I think in today's times and prices, it's food for thought , what do you think ?
Back