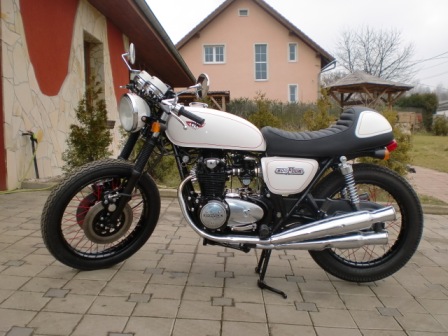 This bike stood under a shelter , where it in place of the headlight and neck control was raining. Owner on it stopped running in 2003. After two years there was paying the fuse and then gave up. After all this time was a motorcycle in the same place where we took him . Under the wheels

and tires were significant bruising bearings in the wheels were rusted . At first it looked like we got a motorcycle from World War 1 ! ! I can not believe someone may have come so far . Wheel rims were so rusty that let them paralyze again it would be more expensive than buying new . Therefore, we chose the path of least resistance, and we let them paint to powder coating together with wire spokes . The result is nice . It is self- chrome is chrome , but the budget is the budget . The engine was so overgrown with moss and everything else that we had it sandblasted salt. However, his recovery was amazing! ! After the 10 -second start singing and ran like hell :-)! ! One of the owners in Germany, probably not the last one , a cherished motorcycle and had to be retrofitted front brake disc extra. So at that time not very common. All officially approved by German T.u.v. Historical documents with technical descriptions are still part of the motorcycle. Brake pads , oil filter replaced with the original version of the open K § N , a new intake throat , candles , all commonplace. I managed to find a tire that recall period of 70 years for a nice coin . The dashboard at that time was amazing, so even now there was no need for her to change anything. Speedometer and tachometer passed variable ala DK CAFE RACER ! Evenly colored background with the company logo discreetly additional space at the bottom. As an eternal creator signature . Instead of the original handlebar type of swallows , which underlines RETROSTYL his time. Round mirrors we kept the original , the controls were already so faded that were replaced. Front wheel us to be tasteful without fender , fender , however, is not a problem to complete . The seat , seat , seat ! ! ! ! That was the problem , still we could not find anything like optimum ! Due to time constraints , prior to the competition Bohemian Custom Bike, we are according ememesek from our upholsterer , who was in seat 24h, agreed to his appearance , which looked very nice. However, physically saddle krapínek obtloustlejší than we expected, but according to the taste and the type or size of seating apparatus of the new owner , you can customize your , if not good. No comfort for some ladies will surely suit :-)! ! Carburetion sailed ultrasonic cleaners, so utmost care has been successful. Electrical remained almost original , there was no need to remake something . The overall state and trying to keep as many of the original elements reached the desired result ! !