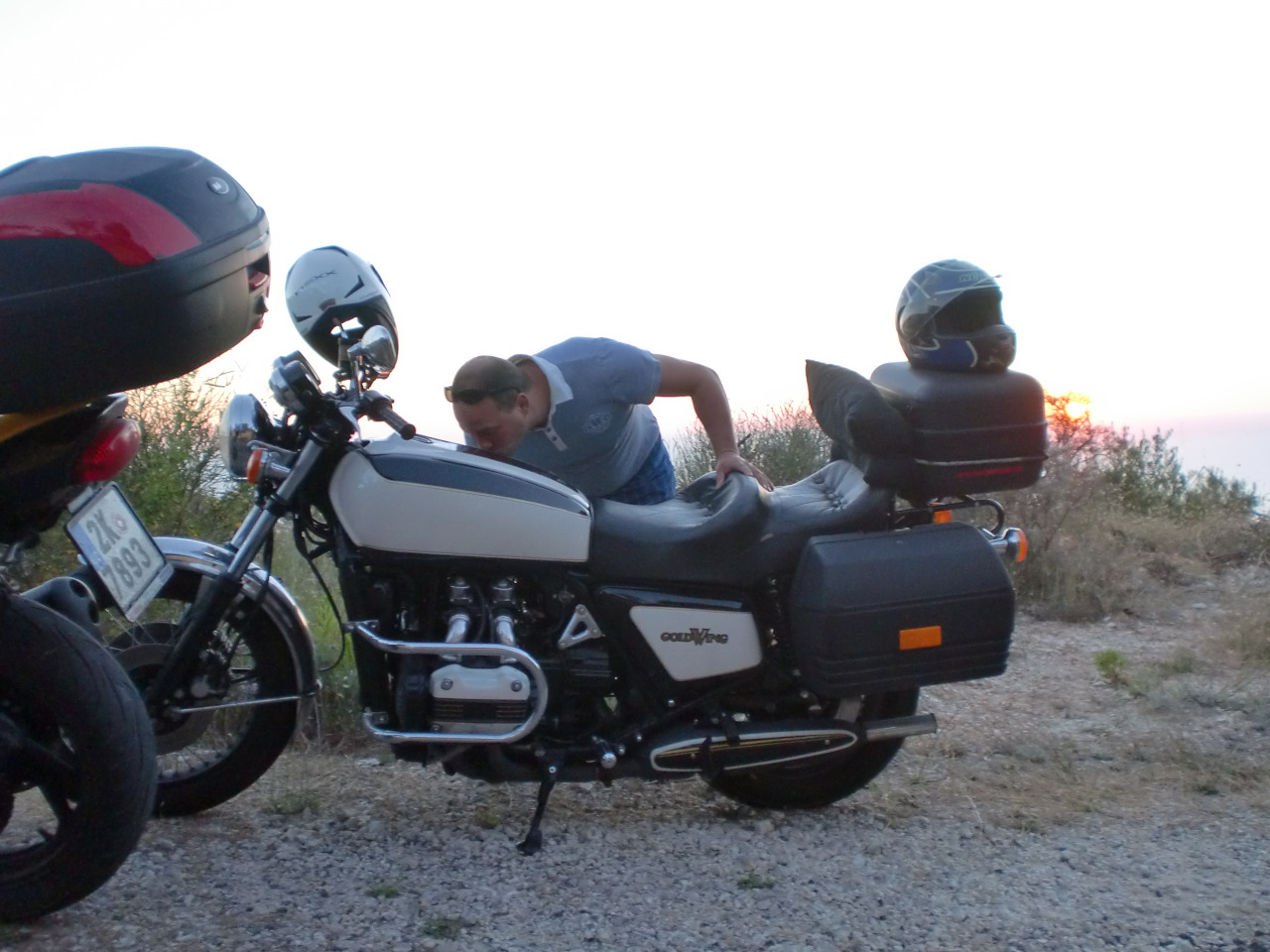 Mamut every inch . When I went for the muscle car , I knew it would be a real Mastodont .

In its time the largest touring motorcycle , which played in its category, all the criteria for him to apply for convenience and travel. I dare say that Harleydavídci at that time had only about competition. Large spacious seat , upholstered separately for each passenger including the driver, a separate department, with plenty of space for even the largest and fattest ass world. Although, there are also no exception, right? :-)

engine. :-) What I figure that one out yet most
backwards kilometers describe a hero from Germany and has 151000 km . We are those of our 82536ti added another 4,153 km, as testovačku sure everything is ok . And it is! But from the beginning.

All routine again as a complete undress and back to feeling good. All that was needed was not even , was changed and was repaired . Oils , candles , oil seals , wheel bearings , clutch plates , brake pump battery that could take off and a truck , its size can not deny that it belongs to the Goldwing '' is the new , tires were looking for the worst , due to weighting the index but it was total ok .

It just is almost new , in addition to evidence of origin .

Painting little bit  We underestimated and there was a post-treatment 6 layers of paint and some trinket on the tank as a monument to underline the size of the motorcycle.

Originally it was to be Cafe Racer and may additionally have to be ! ! !

But we wanted him to attend a holiday through Montenegro, Albania and Greece , and it would Cafíčku two as bağlama probably was not much . On my Yamaha R1 has a better half said no! You probably ....... p l ! :-)

Along the way I always swore you would proponent of modern technology on the brakes , which are as about the whole bike to a proper 120 kg guy with hands like shovels . Achieve the entire palm and ubrzdit like the elephant in the start-up of the brakes with these prehistoric times is an experience , especially if you have a home about 40 years younger machine with the brakes as razor blades , you are enjoying the unshaven face when you bite into it . The same , in terms of maneuverability of the machine , simply by comparing the moto today , the prehistoric Cretaceous period , Jury Mesozoic and beyond. Brake lever I had to adjust krapeneček to reach it , as I need a clutch so allow me to umáčkl , 'cause my hands as a kid .'' :-)

Jéééééénže , at that time, and I dare say even today , sweep in 130km/hs 492kg and 40 cm diameter hole to a depth of about 8-10 cm and the bike shakes and bounces several long , today is the replacement of the rim and possibly renovating the driver of the long bones flight and Fall excluding asphalt ringworm that evening delight , warmed up at every movement despite ofačované body, it is almost impossible to pass without blemish driver and front passenger to mention the shock .

My constant reminders that it is heavy and unwieldy , and it does not brake at all and do not eat a whole it is the hovňous , slowly changed to astonishment and respect for age and endurance motorcycle.

Not only that, it went well from the bottom, like a tank in the mud, when we strip thus accelerating snail herd '' It went pretty smoothly and 5-6 liters to 130km/ha it ladies and gentlemen , it is a machine with carburation of 1975 ! ! ! ! Do you understand ? Year of manufacture 1975, and it's jedééé and 5-6 liters and direct injection then was just a wet dream of every Tunner , simply amazing .

We struggled a bit with adjusting advance , but it is at kladívkových ignition quite common. :-)

Is it me after the long journey to rebuild sorry to Cafe Racer and so far I hesitate to do with it . It is simply a cult and a few experiences with him so little sympathy , but am afraid it would be really Vostrý , the amazing 4válcovej Boxer, that sticks to the sides, just enough krapínek poladit and polochtat a few ponies would happened to the fold.

Shave everything there clogs and nicely underline the size and vastness of the engine hm ..... no more with him about something even think of . :-) We'll see.